All three visitors marveled at the unique birdlife they found during their Galapagos Islands travel, from the "man-of-war hawk . . . strong bandit birds, with long bills cruel as daggers" to "penguins . . . erect as men"

~ Darwin’s discussions of finches, mockingbirds, and other Galapagos Islands birds from Voyage of the Beagle.

~ Melville's "Sketch Third. Rock Rodondo," from The Encantadas or The Enchanted Isles featuring descriptions of birdlife in this unique world.

Enjoy your visit to the Galapagos Islands!

Charles Darwin, a young British gentleman naturalist on his way to becoming a rural parson, won the post of naturalist on the round-the-world survey voyage of HMS Beagle that sailed from Plymouth, England in December 1831. It wasn’t until 1859 that he published his theory of Evolution by Natural Selection inspired by the diversity of plants and animals he saw on the voyage of the Beagle, especially on the various Galapagos Islands.

Herman Melville first glimpsed the Galapagos Islands as a young seaman on the whaler Acushnet out of New Bedford, Massachusetts. Years later, after the failure of his novel Moby-Dick, he tried to regain his lost popularity by writing a series ten of magazine sketches, later published as The Encantadas or The Enchanted Isles, recalling this visit to the Galapagos Islands.

Captain Robert FitzRoy, a career officer in the Royal Navy, selected young Charles Darwin both because of his desire to broaden the scientific scope of his primary mission to map the coast of South America and because of his desire for appropriate companionship during the five year voyage. FitzRoy remained a committed Creationist throughout his life, strongly opposed to Darwin’s Theory of Evolution.

Enrich your visit to the Galapagos Islands with these glimpses of its famous birdlife. 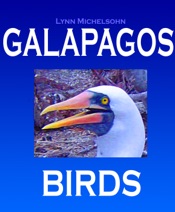