Barnum Brown's (1873-1963) parents named him after the circus icon P.T. Barnum, hoping that he would do something extraordinary--and he did! As a paleonotologist for the American Museum of Natural History, he discovered the first documented skeleton of the Tyrannosaurus Rex, as well as most of the other dinosaurs on display there today.

An appealing and fun picture book biography, with zany and stunning illustrations by Boris Kulikov, BARNUM'S BONES captures the spirit of this remarkable man.

Barnum's Bones is one The Washington Post's Best Kids Books of 2012. 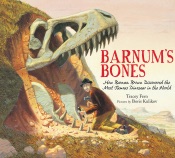