THE "UNSINKABLE" MEETS THE UNTHINKABLE -- A gripping account of the ill-fated maiden voyage of the Titanic.

It took 4,000 men to build it, 23 tons of animal grease to slide it into the ocean, 100,000 people to wave bon voyage, but only one wrong move to tear the Titanic apart, sinking it into the pages of history. On a cold moonless night in April of 1912, 2,000 passengers--both the uber-rich enjoying a luxury cruise and the dirt-poor hoping to find a new life in America--struggled to survive. Only 700 succeeded. Lifeboats were launched half-full; women were forced to leave their husbands and sons behind; and even those who made it out alive were forever haunted, constantly wondering "why me?" Told through captivating prose and chilling first-hand accounts, Don Brown takes the pieces of the broken Titanic and gives it such a vivid shape that you'd swear you've never heard the story before. 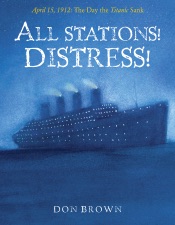