Rarely visited by tourists and barely touched by global village sprawl, Paraguay remains a mystery to outsiders. Think of this small nation and your mind is likely to jump to Nazis, dictators, and soccer. Now, John Gimlette’s eye-opening book–equal parts travelogue, history, and unorthodox travel guide–breaches the boundaries of this isolated land,” and illuminates a little-understood place and its people.

It is a wonderfully animated telling of Paraguay's story: of cannibals, Jesuits, and sixteenth-century Anabaptists; of Victorian Australian socialists and talented smugglers; of dictators and their mad mistresses; bloody wars and Utopian settlements; and of lives transplanted from Japan, Britain, Poland, Russia, Germany, Ireland, Korea, and the United States. The author travels from the insular cities and towns of the east, along ghostly trails through the countryside, to reach the Gran Chaco of the west: the “green hell” covering almost two-thirds of the country, where 4 percent of the population coexists–more or very-much-less peacefully–with a vast array of exotic wildlife that includes jaguars, prehistoric lungfish, and their more recently evolved distant cousins, the great fighting river fish. Gimlette visits with Mennonites and the indigenas, arms dealers and real-estate tycoons, shopkeepers, government bureaucrats and, of course, Nazis.

Filled with bizarre incident, fascinating anecdote, and richly evocative detail, At the Tomb of the Inflatable Pig is a brilliant description of a country of eccentricity and contradiction, of beguilingly individualistic men and women, and of unexpected and extraordinary beauty. It is a vivid, often riotous, always fascinating, journey. 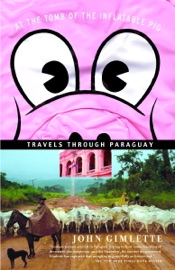