One man’s riveting, contemporary journey through multiple comings-out to authentically live his unique identity.
Black Enough, Man Enough
Embracing My Mixed Race and Sexual Fluidity
I knew I was different, called ‘f****t-ass half-breed,’ teased for my light bright skin, soft curly afro, freckly face, and feminine ways.  Growing up the child of a black daddy and white momma in the black Gullah Geechee culture on James Island, South Carolina in the 80’s, I was an outsider.
My adolescent identity crisis of racial and sexual confusion lead to a trip down the aisle with my high school sweetheart, the joy of fatherhood, and then into the shadows of the down-low before divorce and a tumultuous custody battle.  As I embraced all of who I am, I developed my voice, using it to speak out on the racial and LGBT equality movements, as well as to say ‘I do’ to marry the man I love and create a realistic 21st century blended family. 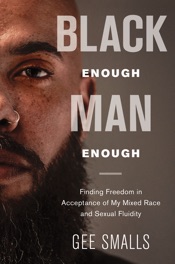