No one told them that their ex would be on this trip.

When Debbie Allred is asked by the new mayor of Amor to go on a one-week recruiting trip, she is thrilled. This would be a chance to earn extra money while utilizing her skills as a business owner and a member of the town council. But it isn’t until after Debbie agrees to the job that she discovers the mayor didn’t give her all of the important details—specifically that Debbie’s ex-boyfriend would be heading the recruiting trip.

Bob Larcher is not a people person. At. All. He loves rules and procedure, which means he’s great at his job at Town Hall, but there is one item in his job description he’d overlooked. Job Recruitment. When he discovers that he’ll be traveling with his ex-girlfriend for an entire week, he’s not sure if he should be ecstatic, or terrified.
Armed with mistrust, unresolved resentment, and unwanted attraction, Bob and Debbie have two weeks to figure out what made them fall in love in the first place. And if it’s worth saving.

Borrowing Second Chances is the sixth book in the Borrowing Amor small-town romance series. If you like geeky guys, stolen kisses, and second chances, you’ll love this heartwarming romance. 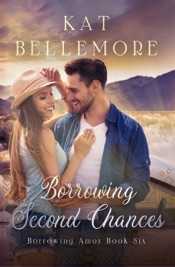