“The invention, or the quaint piece of furniture, wandered into our lives in the 1940s, as a primitive plaything, a clever if awkward addition to the household. It was expensive, unreliable and a bit of an invalid.” —Television, A Biography

In just a few years, what used to be an immobile piece of living room furniture, which one had to sit in front of at appointed times in order to watch sponsored programming on a finite number of channels, morphed into a glowing cloud of screens with access to a near-endless supply of content available when and how viewers want it. With this phenomenon now a common cultural theme, a writer of David Thomson’s stature delivering a critical history, or “biography” of the six-decade television era, will be a significant event which could not be more timely. With Television, the critic and film historian who wrote what Sight and Sound's readers called “the most important film book of the last 50 years” has finally turned his unique powers of observation to the medium that has swallowed film whole.

Over twenty-two thematically organized chapters, Thomson brings his provocatively insightful and unique voice to the life of what was television. David Thomson surveying a Boschian landscape, illuminated by that singular glow—always “on”—and peopled by everyone from Donna Reed to Dennis Potter, will be the first complete history of the defining medium of our time. 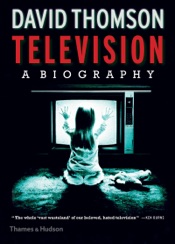