“One of the best thrillers I have read this year. The plot is intelligent and will keep you hooked from the beginning. The author did a superb job creating a set of characters who are fully developed and very much enjoyable. I can hardly wait for the sequel.”
--Books and Movie Reviews, Roberto Mattos (re Any Means Necessary)

OPPOSE ANY FOE is book #4 in the bestselling Luke Stone thriller series, which begins with ANY MEANS NECESSARY!

A small arsenal of U.S. nuclear weapons are stolen from a NATO base in Europe. The world scrambles to figure out who the culprits are and what their target is—and to stop them before they unleash hell on humanity.

With only hours left before it is too late, the President has no choice but to call in Luke Stone, the former head of an elite FBI para-military team. Finally getting his life back in order, and with devastating news on his own family front, Luke does not want the job. But with the newly elected female President desperate for his help, he realizes he cannot turn his back on her.

In the action-packed, international cat-and-mouse chase that follows, Luke, Ed and his former team will have to be more daring, and break more rules, than ever before. With the fate of the world at stake, Luke heads into the murky fog of war and espionage, and discovers the culprit is not who he thinks it is after all.

A political thriller with non-stop action, dramatic international settings and heart-pounding suspense, OPPOSE ANY FOE is book #4 in the bestselling and critically-acclaimed Luke Stone series, an explosive new series that will leave you turning pages late into the night.

Book #5 in the Luke Stone series is also now available! 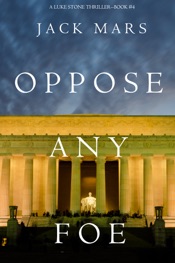