Most of us still know less about Africa's past and peoples than we do about the continent's wild animals. And what we do know is colored by romance - safaris and treks and camel caravans, Solomon's mine and Tutankhamun's curse, the shores of Tripoli and the snows of Kilimanjaro.

Yet the ancestor of all humankind may have lived in Africa. The world's longest-lived, literate civilization was African.

Through the ages, great civilizations rose and fell in what was once called "darkest" Africa, leaving behind mysterious fortresses and splendid art. Christianity and Islam battled age-old beliefs - and each other. Traders on camels were followed by explorers in caravels and by a plague of invaders, hungry for ivory and diamonds and the "black gold" of slavery. In just the last half century, independence has swept away the old maps and colonial ways to jar the balance of the world. 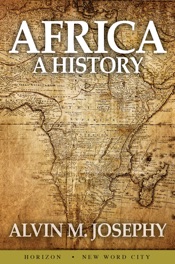